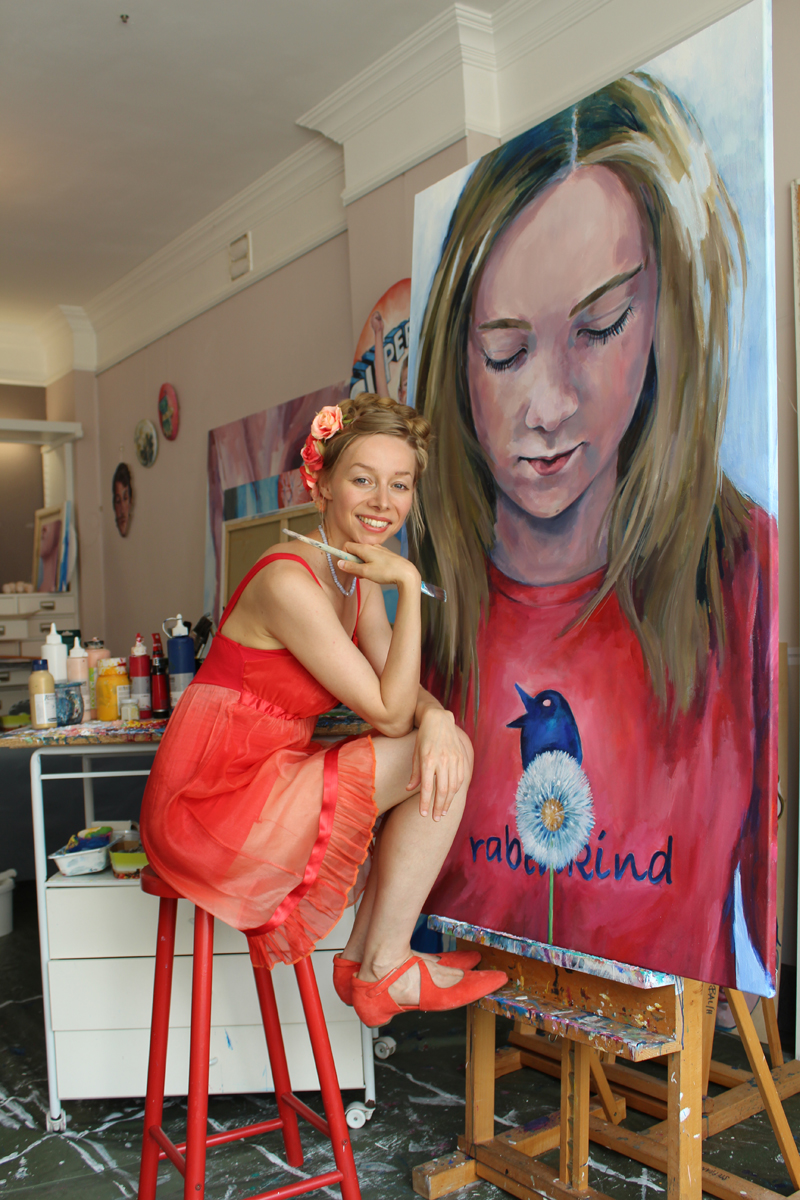 Stephanie Balih impresses with large-format portraits, she sings with Alex Dolphin in her band THE KNUTSHERS.

It is no coincidence that the beekeeper Roland Heinzle approached the artist couple to realize the bee pavilion in Klein Pöchlarn. Stephanie Balih and Alex Dolphin, who are newly married on a farm, are dedicated to the love of nature in many facets of life: She is a painter with her own studio in Artstetten, he is a filmmaker, among other things - and together they are the music formation THE KNUTSHERS. With their album "Beat of the Universe" and songs like "Peace on Earth" or "Vollmond" they don't want to "convert, but encourage conscious living", they say.

The album cover already tells of her philosophy of life: A girl in an imposing skirt is thoughtfully leaning on a planet. The picture bears the "signature" of Stephanie Balih, who impresses with large-format works. In doing so, she succeeds in capturing not only the people with brushes and colors, but also their movements and their emotions. "My specialty is portraits because I'm interested in faces and biographies," she says. This was also the basis of a remarkable cooperation with the Zwettl private brewery: parallel to the 2017 state exhibition in Pöggstall, it presented portraits of charismatic personalities from the Waldviertel with “Art on the Beer Mat”.

With chalk & guitar. Growing up in Bavaria, Stephanie Balih was drawn to Vienna when she was young; She studied graphics (Prof. Gunter Damisch) and artistic teaching at the Academy of Fine Arts, completing both studies with distinction. She already pursued her creative goals as a child: "My crayons were my sanctuary at the age of four," she reveals. "I also started making music at the same age." Her instruments became her voice, guitar and zither. In her major diploma exhibition in 2014, she combined her pictures with her own songs. The best feedback: "My professor, who was very sparing with compliments, said when we left: If you continue like this, everything will be fine, then you will be successful," says the artist.
In the same year, the duo was formed with her current husband. THE KNUTSHERS is a Denglish original creation, "the name says what's important to us: love and humor," explains Alex Dolphin. This combination is spot on, for example, on International Kissing Day on July 6th; That was also the case at the Hotel Schachner in Maria Taferl, where the couple enriched the specially created 5-course kiss menu with their music for the second time this year.

Click here for the online article in the Niederösterreicherin: